Valves are devices — either mechanical or electro-mechanical — used in controlling the flow of liquids and gases through pipes, tubes, tanks and other containers. They employ some form of mechanical obstacle to obstruct or allow flow.

A ball valve is generally a shut-off valve that uses a rotary ball with a bore to control the flow of a liquid or gas. As the ball is rotated 90° around its axis, the flow is blocked or allowed. The ball valve consists of five primary components:

The valve stem is connected to the ball. This can be operated manually or automatically. Automatic operation can be achieved through electrical or pneumatic actuation. The valve seat provides support to the ball and also seals the ball (in part with O-rings) around the valve stem. All these components are placed in the valve housing.

The ball design can either be floating or trunnion. In a floating design, the ball is supported by the valve seats and is kept in place by the sealing rings. In the trunnion design, supports are provided at the top and bottom of the ball to minimize the load on the seat rings. The ball has a bore that has different profiles based on the application. The trunnion design is used in valves with larger diameters and higher operating pressures.

The ball valve handle connected to the valve stem can turn 90°, which opens or closes the system. In most designs, the valve is open when the handle is parallel to the pipe and closed when it lies perpendicular to the pipe. 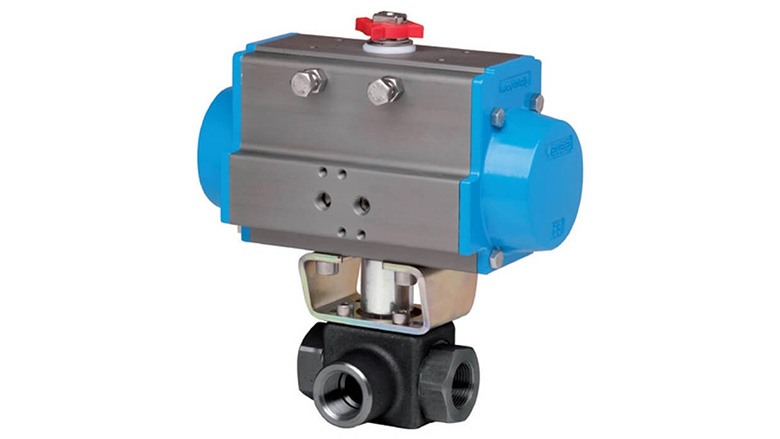 The rotation can either be carried out manually or by automation, using actuators. Automated actuation mechanisms include:

Valves that have been assembled with an actuator commonly are referred to as actuated valves.

Different ball valves are designed based on the following

Number of Ports. Based on the size and shape of ports, the following types are obtainable: full-port, reduced-port, V-port and multi-port ball valves.

A full-port ball valve has a bore that is approximately the same size as the pipeline. Flow is unrestricted, and the valve is larger. Full-port ball valves are more commonly used in throttling applications, in systems that have high flow coefficients and those with low pressure drop. This type of valve is suitable where there is a need for pigging.

Also known as a standard port valve, in a reduced-port ball valve, the bore is smaller than the pipeline. This causes a slight restriction to the flow, leading to pressure drops. This type often is suitable for systems with high flow coefficients. It also is used in flow lines where energy drop is not an issue such as drain lines.

The V-shape ball valve can represent either the shape of the valve seat or the ball. This design allows for better control over the opening and closing. It also gives better linear flow characteristics than a straight hole.

Ball-Support Design. Based on the ball-support design, the different types of ball valves are trunnion ball valves and floating ball valves.

Body Assembly. Based on the body assembly, the unibody, two-piece and three-piece ball valves are obtainable. A uni-body has a single, solid cast body. Often, they are referred to as “throwaway valves” due to the irreparability of the internals of the valve. A two-piece type has a main body with one end connection. Repairs, though possible, are difficult due to galling on the threads when the end plug is removed. A three-piece design has a main body with two end connections. The main body can be detached for repairs without removing the pipe connectors.

Ball valves are widely used in high pressure applications because they possess certain characteristics that make them well-suited for these applications. Reasons include:

In conclusion, ball valves are used to control, guide, direct and modulate flow in a process.

Gilbert Welsford Jr. is the founder of ValveMan.com, an online store. For more information, call 888-825-8800 or visit valveman.com.